We are excited to announce the winners of the 2019 Iowa Review Awards! The work of the winners will be published in our Winter 2019 issue. Thank you to everyone who entered the contest, and special thanks to our 2019 judges: Kiki Petrosino (poetry), Rebecca Makkai (fiction), and Roxane Gay (nonfiction). 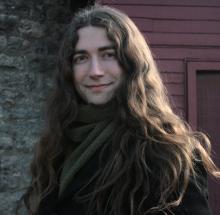 Petrosino says, “In these fiercely imagined poems, our speaker passes between seemingly fixed physical and conceptual worlds—human/animal, past/present, forest/field. This voice finds lyric power in liminal spaces—in ‘the pollen line’ and ‘a change of wind.’ With the speaker, we travel through mirrors to places where you might grasp an animal if only ‘by the curve of its name,’ and where ‘a bird that ha[s]n’t yet been invented’ may sing. This poet’s imagination makes porous the landscapes we thought were familiar. It is a beautiful invasion.”

Brian Sneeden is the author of the poetry collection Last City (Carnegie Mellon University Press, 2018). His poems and translations have received the Indiana Review 1/2K Prize, the World Literature Today Translation Award for Poetry, a PEN/Heim Translation Grant, an American Literary Translators Association Travel Fellowship, and a Katharine Bakeless Nason Scholarship. His translation of Phoebe Giannisi’s poetry collection, Homerica (World Poetry Books, 2017) was selected by Anne Carson as a favorite book of 2017 in The Paris Review. Brian received his MFA from the University of Virginia, where he held a Poe/Faulkner Fellowship in creative writing and served as poetry editor for Meridian. He is the program coordinator of translation studies at the University of Connecticut. 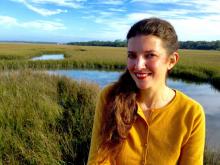 Petrosino says, “This poem presents a lyric vision of Houston, post-Hurricane Harvey. In a landscape ‘glazed’ with ‘unnatural violets,’ the poet contemplates the equal profusion of surreal, yet ghastly histories—such as a dead mother whose floating body made a life raft for her infant during the deluge—which now make up the fabric of the city’s language about itself. Like the poems of Katie Ford’s post-Katrina volume, Colosseum, this piece returns to a site of devastating collective loss, finding strange new flowers glowing among the ruins.”

Stephanie Ellis Schlaifer is a poet and installation artist in St. Louis. She is the author of the poetry collection Cleavemark (BOAAT Press, 2016) and The Cloud Lasso (Penny Candy Books, 2019), her debut children’s book. She has an MFA in poetry from the Iowa Writers’ Workshop, and her poems and art have appeared in Best New Poets, Bomb Magazine, Georgia Review, Harvard Review, AGNI, The Offing, Denver Quarterly, LIT, Colorado Review, Fence, on the Poetry Foundation site, and elsewhere. She frequently collaborates with other artists, most recently with Cheryl Wassenaar on the installation “The Cabinet of Ordinary Affairs” at the Des Lee Gallery. Her work can be viewed at criticalbonnet.com. 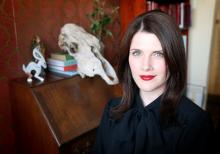 Makkai says, “‘Tongue-Tied’ had me uncomfortably pinned by the end of the first paragraph, and squirming by the end of the first page. I love a story where things happen, and this is a story where things both happen and don’t. A lot changes, and yet a lot is left unsaid, repressed . . . Add to that delicate balance an unusual point of view, two loaded relationships, and a sharp, subtle dose of humor, and I had to pick this story. This one will stay under my skin.”

Makkai says, “‘After’ is an assured, sophisticated story about mistakes and aftermath and, thrillingly, frogs. I knew I was in good hands from the first words, and was delighted to find myself surprised, in quiet ways, throughout. With a subject this heavy, it would be all too tempting to write a leaden and ponderous story; but this one lets the light in.”

Analía Villagra’s stories have appeared in Water~Stone Review, Baltimore Review, and elsewhere. “After” is one of a linked pair of stories; its companion won the 2018 New Ohio Review contest. Analía posts about books on Instagram and writes almost nothing on Twitter @isleofanalia. She lives in Oakland with her husband, dog, and a rapidly growing army of succulents.

Gay says, “‘Tiny Firecrackers’ is a ruthlessly efficient essay about a ‘terrible frightful thing’ that happened to the author. The narrative unfolds in a way that forces you to lean in, to hold your breath, to hope for a different outcome. And there is a twist, sort of, the reveal of a detail that changes everything but also changes nothing because this terrible frightful thing would be terrible and frightful no matter what. ‘Tiny Firecrackers’ is a masterful essay and the beauty of this prose is also an agonizing thing for the truths it offers up.”

Derby Maxwell is a writer, comedian, and lawyer. He has a BA in criminal justice, a JD, and an MFA in creative writing. He lives in Los Angeles, where he is currently working on a novel. This is his first publication.

Andes Hruby was at Bennington College when she started as a reporter for Fortune Magazine during the Gulf War. After graduating, she went on to write copy for Armani, Calvin Klein, Claude Montana, Ungaro, and Valentino. Hruby felt at home in the fashion world due to her decade-long career as a Ford Model. She completed her Columbia University MFA and published mainstream fiction with the Dutton, Penguin & Putnam group. Motherhood introduced her to the world of Scholastic Publishing where she became a ghostwriter. Hruby has been a nonfiction contributor at Allure, Bend Living, Cosmopolitan, Concierge Q, Elle, Garden & Design, Glamour, Marie Claire, Wanderlust Media, and 1859 (Oregon’s Magazine). “The Kitty” is the first chapter of her memoir, another of which was featured in the Los Angeles Times article “The Robert Mapplethorpe photo you haven’t seen: The one he took of me.”