The results are in: we are very excited to announce the winners of the 2020 Iowa Review Awards! The work of the winners will be published in our Winter 2020 issue. Thank you to everyone who participated in the contest, and a huge thank you to our contest judges: Stephanie Burt (poetry), Lan Samantha Chang (fiction), and Leslie Jamison (nonfiction). Meet our winners:

Winner: Amanda Peery-Wolf, “What Can I Ship” (seven poems)
Judge comments: “These poems have the out-of-nowhere invention that all significant poetry demands alongside the emotional focus that lets them speak to our moment. They can expand to take in a nation, a river, or at least the side of the river on which one poet stands; they can contract, like the moon in the night sky. They can encompass documentary material without letting the facts swallow the imagination—and they can see a better day than today, ‘gentle at the right moments,’ ‘where we hum new songs every night to the salt wind.’ It’s an honor to encounter them.”

Amanda Peery-Wolf is a poet and editor living in New York City. Her work has been published in the Colorado Review, and she has been a featured poet at the Inspired Word NYC and the Bowery Poetry Club. 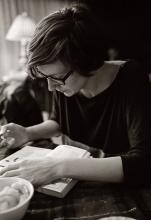 Runner-up: Katie Berta, “Sometimes I Feel Exactly Like Satan” and six other poems
Judge comments: “No good poem confines itself to a story—all poems that tell stories do something else, and do more; these poems do far more. They restrain themselves where restraint feels inevitable, and when their ‘I’ finds a safer place (no place is absolutely safe), they let themselves go: out and up into an environment where patriarchy and power and the heteronormative, hypocritically sex-positive, religiose (not religious) business as usual of Mainstream America can be named, and fought, and shown for what it is. If this writer sounds frustrated, aren’t you? If this writer needs prose—and needs Dickinson—those are the tools. And if this writer sounds wild, that’s because the poems show so much control.”

Katie Berta lives in Phoenix, Arizona, where she works as the supervising editor of Hayden’s Ferry Review. Her poems have appeared or are forthcoming in Prairie Schooner, The Kenyon Review Online, Blackbird, The Rumpus, Sixth Finch, Redivider, Massachusetts Review, Green Mountains Review, and The Offing, among other magazines. You can find her book reviews on the Ploughshares blog, in West Branch, Harvard Review, The Puritan, and elsewhere. She has received fellowships from the Vermont Studio Center and the Virginia G. Piper Center for Creative Writing and a residency from the Millay Colony. She has her PhD in poetry from The Ohio University, and her MFA from Arizona State.

Winner: Maija Makinen, “1993”
Judge comments: “This story stood out with its sensual and compassionate portrayal of an evening in the life of Taimi, an eighty-two-year-old Finnish emigré, and her American granddaughter Silja. Taimi’s richly detailed consciousness is a palimpsest of past and present personal history, known only to her; Silja is a very young woman who is at the beginning of her own history. In one evening, time shifts by years, even decades, but also unfolds in moments through beautiful, breathtaking descriptions of a night-blooming cereus. In the course of this multi-layered story, Taimi decides to obliterate the proof of her late husband’s unfaithfulness—in effect, erasing the past.”

Maija Mäkinen is a bilingual, Finnish-born writer whose stories and essays have been featured in Porter House Review, The Bare Life Review, SAND, and others. She is the winner of the University of Cambridge’s Lucy Cavendish Fiction Prize for her novel in progress, and holds an MFA from Boston University.

Runner-up: Kate Osana Simonian, “The Kiss”
Judge comments: “This is a truly delightful, high-energy view of a special, forbidden kiss at a high school play that is disastrous to everyone involved. I loved the masterful omniscience, the hilarious satirizing of the private school, its administration, its students, and their families. The virtuosity is unmistakable.”

Kate Osana Simonian is an Armenian-Australian writer of essays and fiction. She hails from Sydney and completed her English PhD at Texas Tech in 2020. Her work has been published in places such as Michigan Quarterly Review, Shenandoah, Chicago Tribune, and Best Australian Stories, and she has won various honors, including the Nelson Algren Award and a John Steinbeck Fellowship. She currently teaches at California State University, San Bernardino, where she’s finishing the final draft of her first novel. Check her out at katesimonian.com. 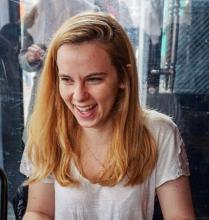 Winner: Clancy Tripp, “Goon”
Judge comments: “‘Goon’ is a stunning essay about anger and survival. It’s about sexual violence and unexpected forms of caregiving. It’s about bruises and little toothbrushes and running amok. It’s about the quest to find language for feelings that seem impossible to express—its fiercely acute intelligence is powered, throughout, by the desperate throb of a human heart and its stubborn pulse. The vitality of the prose itself feels like a reminder of what the essay itself quotes from a textbook—that running a fever is proof of life. The prose in this essay is running a fever, and it’s very much alive.”

Clancy Tripp is a Midwest-based writer, humorist, and teacher. She lives and writes in Columbus, Ohio, where she is currently pursuing her MFA at The Ohio State University. She can be found on Twitter @TheUnrealTripp or on her website at www.clancytripp.com. 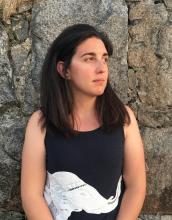 Runner-up: Laura Price Steele, “The Host Body”
Judge comments: “‘The Host Body’ offers an incredibly granular account of a failed suicide attempt—painfully, grippingly specific in its evocation of the physical and emotional grain of the experience—that is simultaneously tender and wry. The closing insights of this essay lodged under my skin, where I imagine they will stay for good: ‘The girl understands that the rest of her life—whatever it may look like—will be two- hearted, shared between the both of her. One who cannot quite imagine living another day and the other, who can.’”

Laura Price Steele is a writer and editor. Though originally from Colorado, she now lives in Wilmington, North Carolina, where she earned her MFA from UNCW. She has been the winner of the Ploughshares Emerging Writer Contest in nonfiction as well as the Montana Prize in fiction. Her work has been published in or is forthcoming from CutBank, Ploughshares, So to Speak, and Shenandoah, among others. Currently she is working on a novel. You can find her at Laurapricesteele.com.