Poem Set in the Day and in the Night

Just do things that are meaningful to you.
Go to the beach, says the doctor.

The man lies on his stomach.
The sand is fine, chewed through
by the waves many times over.

The sun is wide, like an eye cut open,
and it blasts the man
so that his whole shadow
scuttles beneath his belly.

The shadow grows dense
and the man sweats himself thin.

The man becomes a web
and his shadow becomes a spider.

It’s not that his life passes to the shadow—
but a tipping happens
as in an hourglass,

and there’s suddenly a new order
to the life he never knew was shared.

That night a cricket kills himself in the man.

It’s unbearable, his silk body thrilled through
with the screams. All the man is: a speaker—

and not loud enough to communicate
the fear to God.

Enough, however, to bring the spider.

Who brings a kind of relief.
Is it a sin to take the moon? On a night like this?

To bask the body in soapy light, sipping in
gray moisture like beads on a necklace?

The monster is quiet on his long white limbs—
you only notice what he mops up.

And while there’s no such thing as pure silence,
memory breaks apart
and that’s close enough.

Close enough for sleep:
A sweet face
rips in half and

On the other side, you’re the body again,
and the shadow is again shadow.

You can enjoy anything—
you don’t remember
how clumsy the old hands were
how picky the tongue.

You ask why the dinner table has been so quiet.
I’ve felt, for a month, like the table:

holding strange things in my head
when there are voices present.

And when the voices die,
a cool cloth and some sparkling spray.

I’m on painkillers around the clock,
and I fear it’s always been

just the pain talking to you.

of my mouth, but it was holding a spatula.
It was me if I had learned to cook.

The pain drifted to the kitchen.
He hitched himself to the oven, was a centaur

completed by bread, great black loaves
bursting from the oven,

and then the vision vanished.
I followed, and stood where he had stood.

The knives rustled in the block,
the pans clacked overhead.

I’m sterile from chemo,
and thought of that.

Sure, I wish my imagination well,
wherever it is. But now

I have sleep to fill. Every night
I dream I have a bucket

and move clear water from a hole
to a clear ocean. A robot’s voice barks

night I’d regret it.
I might need every last drop. Nobody will tell me.

Max Ritvo's debut collection, Four Reincarnations, is slated to appear in October 2016 with Milkweed Editions. He was awarded a 2014 Poetry Society of America Chapbook Fellowship for his chapbook AEONS. His poetry has also appeared or is forthcoming in the New Yorker, POETRY, and as a Poem-a-Day for Poets.org. Ritvo’s eight-poem sampler in Boston Review, introduced by Lucie Brock-Broido, was named as one of their top 20 poetry selections published in 2015. 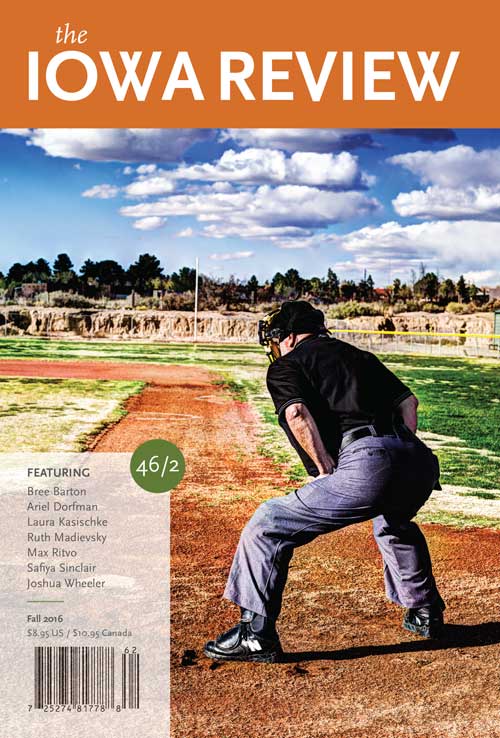