Y is a half-famous actor, forty-one to X’s eighteen, and X was his backup babysitter. It’s been done before. Now, four months after they met, she plucks a dress from her closet and curses the job’s origin.

Her uncle the academic. Her uncle the origin. Y was a visiting professor in the drama department and her uncle, a cinema studies man, was his friend. X wants, abstractly, to be an actress. Her uncle is bloated with family guilt and misfired compassion, because he thinks he didn’t do enough for the undereducated daughter of his unlucky sister when she, the daughter, hauled one suitcase of her life from that town—that sad town thick with permacloud and cornfield and postindustrial ghost that her mother, his sister, never left—all the way to Crown Heights, Brooklyn, 11225.

So he introduced X to Y at a tight coffee house.

When X met Y—the man from the screen, from the decent shows and the bad films and the mediocre films and that one genuinely good film—she feigned posh indifference, but she was, in fact, thrilled. He was the first man she’d ever seen wear an engagement ring, and without supporting evidence, she interpreted the gesture as a feminist one. She could see the time all over his skin. She could hear the divorce in his voice. She could tell that his front incisor was fake. She could reach out and touch him if she wanted. She wanted. She didn’t.

Within two months, she did. They hugged as she left his Park Slope brownstone post–two a.m., her body on the step in the March night, his on the mat inside, the children deep asleep upstairs. That was the second time she babysat his children and the first time X and Y touched.

It’s true that while he and she were beginning, he and his celebrity fiancée were ending. Y mailed X megabytes, typos, and music through e and air. They began to meet for coffee. For drinks. For hours. It was his fault, it was hers, he wasn’t, it didn’t matter, it mattered most. They began for months. He became her mentor. A friend, maybe, even, despite the odds. She became his hobby. She told him she loved Paradise Lost. She told him she loved his performance in the Broadway play. She told him she didn’t have it so easy. X and Y played emotional apocalypse by Gmail, phone, late-night Scotch, and letter—all talk, no touch. She got to be the world, which made him the ending. There was no revelation. He orbited her. She spun.

First came the crush on his house. It was striking, the house, disheveled and tasteful and handsome as he, with high ceilings and oil paintings and creepy, gratuitous technology. It’s true that X was beautiful, and Y was on the wrong side of forty-one. It’s true that she had read many books and developed many theories. It’s true that both children asked her to cut the tags from their pajamas, and she thought this meant that they were sensitive geniuses. It’s true that once, after the kids went to sleep, X stood in Y’s immaculate kitchen and gazed into a pantry of exotic balsamics. Took a photo. Deleted it immediately. It’s true that she could feel her pulse in her eyes when she saw his name on her phone, his car on the street, his shoes in a room, his gaze on her chest. He dealt flimsy offers to connect her to the Right People. He once joked that he would pay her for her babysitting with a live horse. I couldn’t accept that, she’d blushed. I couldn’t afford that kind of payment. It’s true that by mid-March, X was redly in love with Y. It’s true that his fiancée was on tour in Europe, and he was lonely. X was a pretty distraction for him, but when she was offstage, he forgot she existed. The ring was titanium. The gesture was feminist. He had always been lonely.

One month after X and Y hugged for the first time, he asked her to stay a bit longer, so she did, and he uncorked a bottle, and filled their glasses tall, and they sat in his living room, a room dressed like money, two bodies situated opposite each other on surprising furniture, two bodies running hot, two bodies ticking, two brains blue, and they verbally undressed their childhoods, their heartbreaks, the deaths and the allergies and their secret, mutual, unfashionable theism, and once they both felt violently understood, they climbed the stairs to his bedroom and took off their clothes. The sex was polite.

That was in April. Now it’s May.

X takes comfort in facts. Y has no use for them. This is one of the many differences that ended them before they began.

What do you want me to do? he said in his sheets, his mouth on her neck.

Back in her bedroom the following morning, window open, breeze cold, ceiling low, she emailed him, Are you upset?

Twenty-eight days have passed since the Night. For twenty-eight days she freshed and refreshed, received nothing, told no one, googled his face and watched his movies—just the bad ones. In her bed, she chewed spicy chips and baby carrots, brushed crumbs off the keyboard, researched auditions, jobs, workshops. Pressed pause. Lost her mind. While she filled her shifts at the pizza place on Franklin, she took too many bathroom breaks. Ransacked her inbox each time.

He told her not to tell. Pre-sex, he also told her he was in the process of calling off his engagement. Y’s fiancée was a pop star too famous for him. He insisted their relationship had expired, but now, twenty-eight days later, X can see the glint of their sparkly romance from her bedroom, even with her eyes closed, and she knows that Y hasn’t broken up with the pop star, won’t break up with the pop star, for reasons she of all people understands.

It’s been twenty-eight days since the Night. Now it’s evening. Friday. May. She steps into the dress she selected. He loves being seen and it shows, X tells her houseplants on the way out of her apartment.

The reception for her uncle’s third wedding will take place at the Prospect Park Boathouse at six p.m. X inhales the pollen and dirt of a place that is too verdant and wild for the city it inhabits, and she walks, allergic to grass, allergic to something, through trees and light, over trash, past the merry-go-round, warm in summer, warm in anxiety, warm from the Cava she gulped as she rearranged the colors of her face, aware that Y may be there, will be there, must be there. After thirty minutes of walking, she reaches the boathouse, which stands yellow and enchanted on a frothy green pond.

She smiles. She hugs her uncle. She pities the bride. She kisses her cousin, the uncle’s daughter. She’s younger than I am, whispers the cousin into X’s hair. She’s only twenty-fucking-five. X hiccups. An epidemic, she replies, then orders a bourbon on the rocks and melts into the buttery room. She sips, she wobbles, she orders another. Takes refuge on the terrace because her chest is tight, and the air inside is full of perfume.

And of course, he’s there, on the terrace. Hair ruffled, suit blue, skin tan. Laughing with a flock of university people. Flapping hands, colorful voice, plumes groomed. Looking happy and healthy as fuck.

He turns. He sees her. She feels seen. As he excuses himself and approaches her, she forgets how eye contact works. She does it wrong.

Y has not been drinking alcohol tonight. He shakes from his third coffee, aware that he has no reason to be so oppressively awake at a time like this. Standing before him, X shakes in lilac lace, aware that she’s suitably dressed for her role as disposable ingénue. Neither of them feel capable of change this month.

Finally, he says, What’s up?

Nothing. She flushes. I mean—

Yeah. He smiles. It hurts her. I know.

Have you mentioned me to your therapist, X wants to ask. Either way, she’d be offended. She chews a chip of ice and stares at the small bridge that yawns across the pond to prove that good is, indeed, what’s up. He is a child but different, both of them children but different, so in the breeze they say nothing. It’s Friday, but it feels like Wednesday. It’s summer, but it smells like fall. It’s hot, but X shivers. She is drunk.

She blinks. I guess so.

Your uncle looks so happy.

She swallows. I guess so.

Certain sentiments boil and spit in her chest. What I love most about you, she wants to say, is your house. I have such a big crush on your house I could masturbate to it. Didn’t I get into bed with you after the tour of your beautiful fucking house? Yes, I wanted your mind and your words and your face and your sadness and your sensitivity and your fame and your talent and your power and your connections and your weirdness and your ratings and your views and your social media following, but ultimately—ultimately—I wanted to fuck your house.

He shifts his weight and nudges her foot.

X pictures him naked without meaning to. She is astonished that no one can hear the noise inside her body.

Y aches to leave. X’s eyes are too wide, her face too used, and he is afraid she will do something dramatic. He regrets unclasping her bra. He needs to stop doing this kind of thing, with girls so young and Midwestern.

How are the kids? X asks, overjoyed at the appearance of such a normal question in her mouth.

They’re great, he smiles. J perfected that magic trick he was showing you.

That’s amazing, she says. It’s not.

What do you want me to do, he asked in the sheets of the Night. X wanted to preserve his sadness like kimchi. Y wanted to preserve his youth in hers. He is forty-one, but he never made it past fifteen. He didn’t want her to interview him, but he needed her to ask him questions. He is forty-one, and he is terrified. She didn’t need a future inclusive tense, but she wanted him to wring the O from her voice just once. Once he did, she just wanted him to ring. In his room he wore none.

Okay, well, he says, glancing over his shoulder. I should get back.

She stares. Maybe for a moment we could just—

So good to see you.

He touches her arm and returns to his group by the water.

In the cab ride back to her building, X regrets deleting it.

The photo of the exotic balsamics.

Tess Gunty is a Lillian Vernon fellow at New York University’s creative writing MFA program. She is also a fall 2017 Graduate Research Institute fellow in Paris. Her writing awards include the American Voice Award for a short story, the Ernest Sandeen Award for an outstanding poetry collection, and a Sigma Tau Delta scholarship for personal memoir. She lives in Brooklyn. 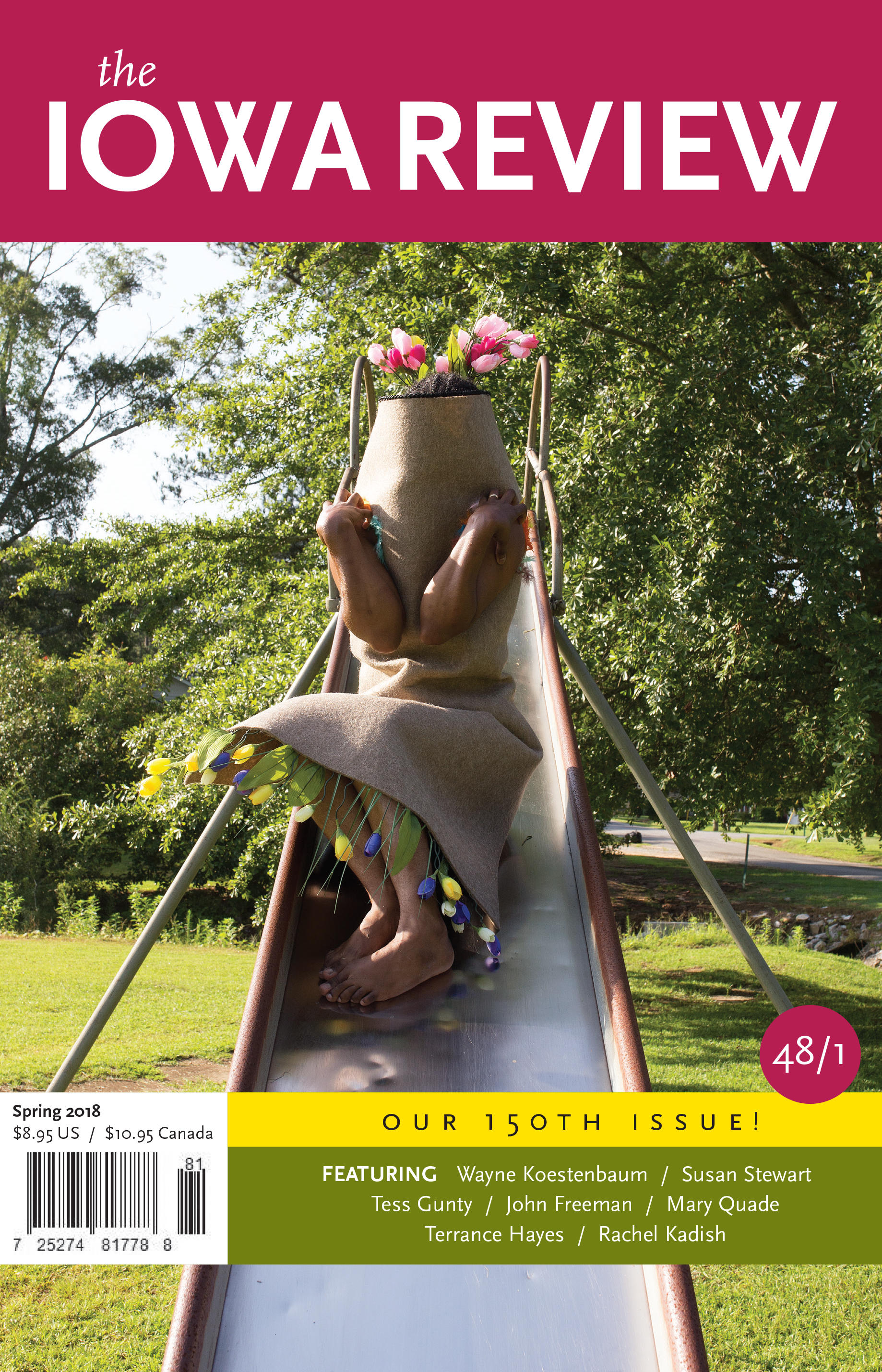