On the seventh day I saw the concrete breached,
the river returned to its original vein, and pulsing there
slick and muscular multitudes
of Coho winding north to spawn.

I understood intuitively, if the Coho are to return
I must maim the developer’s trademark.

Now here comes the Prince of fractured libido
and his purse dog, Fritz.

Here’s our man, the Viceroy of Bitumen
also known as
“He who bloviates well into the lunch hour”

Not quite a circle of hell, more like a coffee ring
of restless feet treadling beneath a conference table

while the talking heads attached itinerize
their suicidal mission:
desertify the mountain, burn the slash.

I vow to banish these knuckleheads
just as soon as I get born again.

gears of equal and opposite force manifest
violet thunderheads, lightning-crazed
traveling out from the center in concentric rings
to make a world.

We will meet, in the road to Tar Sands
a man of myriad chattering heads—

Who has for an opponent
the meeting of middle class reformists.

You waiting for the thrill jockey to get his fill
and climb down off us?

Just ask the kids at Fort Mac, where threshers undo
the true name of Lake Athabasca.

Forgone, that we are all accomplice
but it’s not too late to turn
if you want to
cool your heels here on earth.

Lisa Wells is a poet and nonfiction writer from Portland, Oregon. Her debut collection of poetry, THE FIX, won the 2017 Iowa Poetry Prize. A book of nonfiction, Believers, is forthcoming from Farrar, Straus & Giroux in 2019. She lives in Seattle. 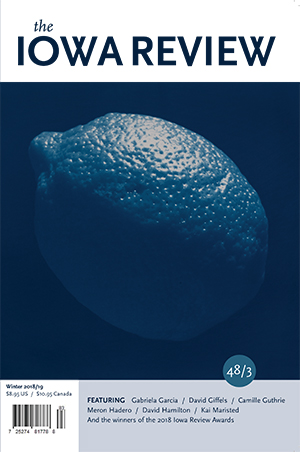